I waited for eight years to be diagnosed with axial spondyloarthritis (axial SpA). I found out when I was 27 and while I waited, I felt lost and scared.

My first symptom was a red, sore eye that would not go away, which started when I was 19. After being prescribed antibiotic eye drops, I was referred to an eye hospital and told it was uveitis. No one had spoken to me about axial SpA. And even after I developed pain in my lower back, none of the healthcare professionals had made a link between uveitis and axial SpA. I was treated with steroid eye drops and even once a steroid injection into the eye. The uveitis treatments worked but then I’d have another attack a few months later.

When I was 23, my uveitis returned and this time, it didn’t seem to get any better. It was worrying and scary as my vision got blurry.  My GP decided to do further tests to see if there were any underlying and it was at that point I discovered I carried the HLA-B27 genetic marker. But still no one made the connection between how the genetic marker and reoccurring issues with uveitis, could be linked to axial SpA.

By this point my anxiety had built up as I didn’t know if I was ever going to get better.

In May 2018, I took part in a half marathon and started to experience excruciating pain in my left hip, which didn’t go away. I was referred to a physiotherapist, after giving up running, but it didn’t get any better.

For eight years my time was taken up with medical appointments and health concerns, while my friends were enjoying their time at university and early careers.

One day, in August 2019, I woke up in excruciating pain and couldn’t get out of bed to go to work. I called my GP and told them I needed further investigation as this wasn’t just a post-marathon injury and it was now really affecting my life. I was sent for an MRI scan, and then to a rheumatologist who finally diagnosed me with axial SpA.

Although it was a scary diagnosis to receive, especially as a fit and healthy young person, I was grateful to finally find a better way to manage and treat my uveitis and live a fulfilling life. 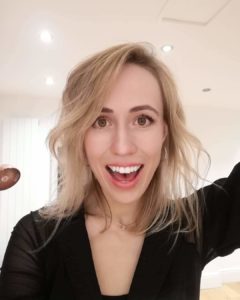 For more about managing uveitis