Dale Webb, NASS CEO, was pleased to join the Cross Party Group (CPG) for Musculoskeletal (MSK) Conditions and Arthritis at their reception in Scottish Parliament on 15 May. Dale was also joined by representatives from our branches around Scotland for the event, Elephant in the Room. The event was a drop in for MSPs, hosted by the CPG convenor Brian Whittle MSP, and aimed to raise awareness amongst MSPs of MSK conditions and arthritis. Speakers included Joe Fitzpatrick MSP, Minister  for Public Health, Sport  and Wellbeing and Professor Colin Howie who specialises in orthopaedics.

Dale will be presenting to the group in November, talking about the Every Patient Every Time campaign in Scotland. Many thanks to those who regularly attend meetings on behalf of NASS Iain MacDonald, Eddie McGill and Murray Brown. 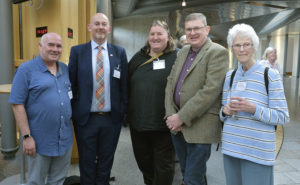