Show your support for NASS this festive season with our exclusive Christmas cards!

This year’s cards all incorporate a splash of orange to raise awareness of axial SpA and have been designed by NASS supporters as part of our first national Christmas Card design competition. Thank you to everyone who sent in their designs!

We had so many wonderful designs to choose from, and it was a tough job for the NASS team to shortlist just twelve cards, which will be available as e-cards (see below). Jonathan Blackham, a Lifestyle Advertising Photographer who lives with AS, helped us choose our winners. 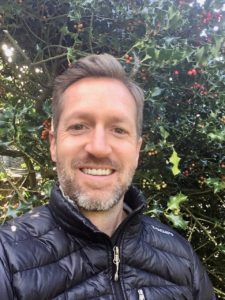 Jonathan spent the definitive years of his life growing up in South Africa. After receiving a first-class degree in Cinematography in Cape Town, he spent many years in commercial film making, working on films such as “Blood Diamond” and “Lord of War” before finding his true passion in landscape and lifestyle photography and moving to London. Jonathan was diagnosed with Ankylosing Spondylitis at the age of 12. It took a further 20 years and two hip replacements to finally get control of the condition through exercise, diet and medication. Jonathan is passionate about supporting others living with this often debilitating condition and is currently working on a new photographic project, “Movement is treatment”, supported by NASS.

He said, “I am honoured to help judge this year’s Christmas Card competition. It was a tough job. With so many beautifully crafted and clever cards and stunning photographs, there could have been numerous winners! In the end, I had to go with the designs that spoke to me personally.”

Our winning cards are listed below and are available to purchase on our website. 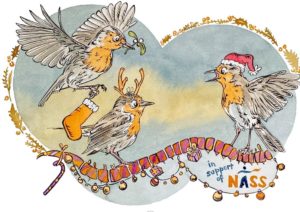 Kamlesh is a surgeon who loves to draw. He says, “my card was inspired by a playful little Robin which visited our garden frequently when I was young. He was full of character and seeing him always used to make my day. I always used to imagine what mischief a few of them would get up to around Christmas time!”

Jonathan said, “I love a cheeky robin and we have a few living in the giant holly bush outside my front door who come out to say hello when I’m gardening. I could totally imagine them dressed up like this on Christmas morning! A really beautiful card and great skill in producing it!”

Santa and his Sleigh, by Freddy Hand 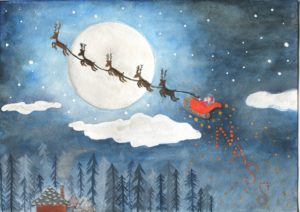 Freddy Hand is a lockdown artist helping to raise awareness about axial SpA. She says, “I never knew I could paint until I had a go this past year, and I have had so much fun trying. Happy Christmas, I hope you all enjoy my merry NASS sparkles!”

Jonathan said, “A nostalgic choice on my behalf as this is the kind of card I grew up with. I really love the mystical scene of Father Christmas with his reindeer prancing through the sky in front of a full moon as the snowflakes fall gently among the pines and NASS manifesting from a magical jet stream of orange sparkles! I feel like I need a glass of sherry and a mince pie! Merry Christmas!” 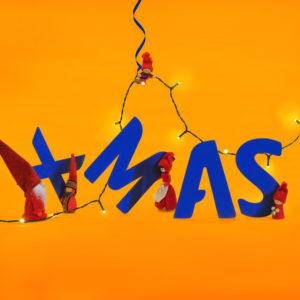 Rebecca Matthews is a freelance graphic designer and art director who lives with AS. She says, “I designed this card in honour of my grandmother Annie, who also had AS, with the hope of raising awareness of the condition. The scene features traditional Christmas ‘nisse’ from Annie’s homeland of Denmark.”

Jonathan said, “As a photographer, I know this would have taken plenty of time to set this scene up and loads of fun getting all the little figurines talking to each other and creating a balanced image! Really sweet and well thought out idea and the obvious orange background is a huge shout out for NASS!” 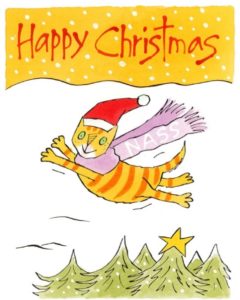 Stretching Cat has been designed by Paul Devonshire, who says, “I am an illustrator living in Shropshire and have been a NASS  supporter since diagnosis in 1984. I was inspired to create this design after watching my cat perform his daily stretches – something we can all aspire to!”

Jonathan said, “While looking through all the entries I had my 3-year-old hovering about me and as soon as this card came on the screen she launched herself over my shoulders and wanted to know “who’s this cat!” So I shall be purchasing this card on behalf of my daughter for her to send to all her friends! I also like the idea of a cat stretch to remind us all, condition or not, that stretching can play a huge role in the health of our bodies. Perhaps, not after Christmas dinner though!”

We Wish You a Merry Christmas, by David Dunn 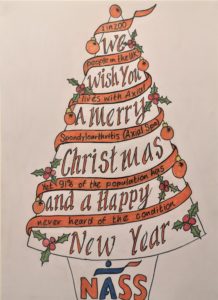 Jonathan said, “I liked this one as it’s a combination of a traditional festive Christmas tree decorated with holly and oranges but also has the dual function of building awareness about the condition with a clear message! It’s also the kind of card my mother used to make for our family and friends when I was a boy. Love it!”

All proceeds from the sales of our Christmas Cards will help us transform the diagnosis, treatment and care of everyone living with axial SpA.

To order designs as e-cards please visit Making a Difference Cards, and click on ‘Charity’s Own Designs’