Richard started to experience axial spondyloarthritis symptoms at 18 but didn’t receive a diagnosis until he was 23. In this blog, he shares his journey to diagnosis and how he has learnt to manage his pain over the last 50 years.

When I was 17, I was cycling 400 miles a week and doing heavy-weight workouts four times a week. After getting married at 18, I was accepted into the Fire Service, and it was when I started training that I noticed an unusual sensation in my lower back and my right leg.

During the third week of training, I was on the outside of the training tower using a hook ladder when I suddenly could not move. Two of my colleagues came up the tower and helped me back inside. I went to the local hospital where I was examined and sent home.

Then the pain started again, mainly during the night. I would wake up not able to get any relief from the agonising pain which would get me staggering round my parents’ house and eventually falling asleep in a chair.

I was sent back to the hospital on numerous occasions, over a 3-month period, where I would wake up in unbearable pain but by the time I arrived at the hospital, all the symptoms and pain would suddenly vanish. On one of my visits, the doctor accused me of being a time waster! I left the hospital feeling lost. By this stage I had gone from a super fit young man weighing twelve and a half stone, to a very broken, withdrawn person weighing just under nine stone. 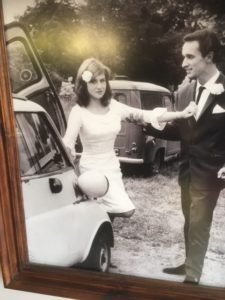 At the age of 23, I visited my GP and was seen by a locum doctor who had worked at the local radiology department. She immediately said it was axial spondyloarthritis (AS), which I had never heard of. This was in 1968.

She referred me to the radiology department where I had a lot of deep x-ray therapy* on my back and hips. Over  the next year, I was very sick and experienced breathlessness as part of the side effects of the therapy. However, within two years all the pain had subsided. I put on weight and my confidence grew. I felt like a new person! Our family grew in the next few years as my wife, and I welcomed our daughter and our son.

Over the last 50 years, I have occasionally experienced some symptoms, but I am able to manage the pain. Now at 77 years old, I am retired but still very active and most days I spend at least an hour and half exercising which includes a step machine, rowing machine and weights.

I am forever grateful to the locum doctor who diagnosed me after years of living in excruciating pain. She probably saved my life.

* X-ray therapy is no longer used to treat axial SpA