Ben took a boiler up a mountain! 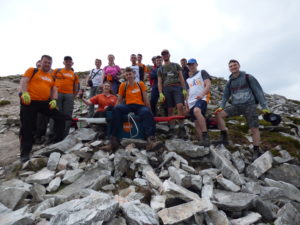 Since Ben Kennedy’s wife Rebekah was diagnosed with AS, he has wanted to do something to raise awareness and show his support of NASS.  As a heating engineer, he hit upon the idea to get sponsored to carry a 100kg boiler to the top of Mount Errigal (in County Donegal) and back down again!

So on 3 August, Ben set off at around 9am with a group of supportive friends.

The first 3rd of the climb is mostly all bog making it hard enough for us to walk let alone carry our boiler. In some places we really joined forces with 9/10 men around the boiler carrying it through some of the extremely sticky, wet terrain.

Errigal is a funny mountain as it goes from one extreme to the other meaning that from the bog it then begins to get rough and rocky.

As the team moved higher over the shale and rocks, the climb got harder as the gradient increased. Eventually, quite close to the top, to ensure everyone stayed safe, they left the boiler and continued their climb up to the top where they enjoyed a hard-earned lunch.

My wife Rebekah, who hasn’t climbed a mountain before, came along and supported me all the way to the top which was no mean feat with her having AS. I am so proud.

On the way down we collected the boiler again and all made it down in one piece which I was very thankful of! To top it off, Rebekah and I hosted a huge BBQ for everyone involved as a thank you for helping us achieve the goal!

Rebekah said to me that evening “It is still easier to carry a boiler up a mountain than be diagnosed with AS.”  this really hit home with me because I do believe there is truth in her words, certainly in Rebekah’s case, and I’m sure others can relate.

Ben has been incredible with his fundraising, raising over £2,000 with this unique challenge and everyone here at NASS is hugely grateful.