After nearly three years of living in pain and constant worry, Laura Wilkinson from Plymouth was diagnosed with axial SpA in May this year, just two days after her nineteenth birthday.

Axial SpA symptoms often start in someone’s teens or early twenties. Yet, the current delay to diagnosis means that thousands of young people like Laura are left in pain while they wait for answers, with their hopes and dreams for the future put on hold.

At NASS, we are here to listen and to understand. Our Helpline is for everyone affected by axial SpA, and we can offer a friendly ear and support when you need it most. But we can only do so with your support. Just £10 can cover the cost of a call or email to our Helpline for someone who desperately needs support with their axial SpA.

If you can’t donate today, please share this article and help us raise awareness about the impact of axial SpA. 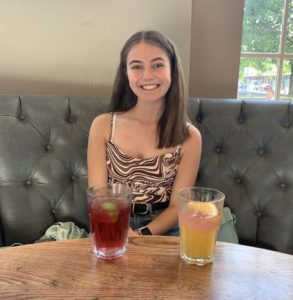 “My symptoms started back in 2018 with pain in my lower back which radiated down my legs. My GP told me it was likely to be associated with stress. I had just recovered from a recurrent urine infection, just started my first year of the sixth form. My sister had recently been treated for scoliosis, so it had been a time of change and worry for us as a family.

Hoping my symptoms would go as soon as they started, I cracked on. But over the following months, the pain only got worse. I became increasingly tired and I was really struggling to walk.

I was so frightened.

Thinking that a neurological problem might be the cause, my GP referred me to my local hospital, where I had several MRI scans. When the scans didn’t show anything, I was once again told that my pain was likely psychological. I was absolutely heartbroken. I had felt sure that I’d be given some answers, but I was just left with self-doubt.

What if there isn’t actually anything wrong with me? What if it is all in my head?

I’m lucky to have a supportive family, and a wonderful boyfriend, who didn’t doubt me for a minute and helped to give me the confidence to keep pushing for answers. But when the pandemic hit, it became harder to see my GP. I was home from school and in so much pain. It overshadowed everything, and I wasn’t able to continue my studies.

After what felt like forever, I received a referral to see a fantastic rheumatologist, who almost immediately said, “this could be axial spondyloarthritis”. It was the first time I had ever heard of the condition. After nearly three years of living with pain and worry, I was finally diagnosed with axial SpA in May 2021, just two days after my nineteenth birthday.

This diagnosis has changed everything for me. It’s hard to explain what it’s like to be a teenager and have so much worry about the future.

Living with chronic pain is so hard. I get so angry and frustrated, and it’s hard not to feel pessimistic about the future. My condition will never go away. It’s been so hard to get my head around.

My dream had been to be a nursing officer in the forces, and I’m pretty sure that path is closed to me now. I’m back at sixth form, completing my unfinished year, and I had planned to study nursing at university. But now I’m not sure what to do next. I’ve got a Healthcare Assistant job, but I have to work part-time, flexible hours to manage. Even socialising with friends is hard. I’ve got such supportive friends, but I often can’t keep up with them. I’d love to go clubbing, but my pain and fatigue are too much at the moment.

NASS has really helped me understand my diagnosis. 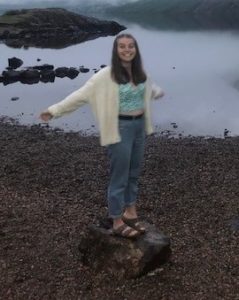 I want to help raise awareness about axial SpA and how it affects young people.

A year or so earlier, my grandmother had actually suggested I might have arthritis. She said my symptoms, such as night pain and stiffness, were similar to those experienced by her and her friends. As a young person, arthritis isn’t something you consider, and for nearly three years, it wasn’t something that medical professionals considered a possibility either.

If you are living with pain, don’t give up and keep pushing for answers. It’s not always easy, but the earlier you catch axial SpA, the sooner you can start treatment.

Living with axial SpA is hard, but there is hope.

Now that I’m diagnosed, I’ve started biologic medication, which I’m hoping will have an effect soon. I’m also slowly getting back into exercise, and with the support of NASS and my mum, grandad and nan, I recently took part in a sponsored one-mile swim. It was such a challenge, but I am so grateful my body allowed to me push myself. It gives me hope for the future.”

If you have any of the symptoms Laura has described and suspect you might have axial SpA, please speak to your GP. NASS also has an online symptom checker, along with loads of free resources about axial SpA. And if you are still not sure, please get in touch with the NASS Helpline. It’s free, and Sally and Garry can help point you in the right direction.

We can only continue our support with the help of people like you. If you can make a donation towards our services over the coming months, we would be very grateful.